We are very proud of our new front garden at St James. It is called the ‘Camino Garden’, as it features the pilgrim’s shell prominently in the middle. We often refer to the scallop shell symbol at St James, because of its strong relationship with the famous pilgrimage walk in Spain. What is the significance of the shell? Pilgrims who walk the Camino hang the shell on their backpack to indicate they are undertaking the pilgrimage. Years ago, it was a symbol of Jesus’ outstretched hand but also a convenient tool to scoop food and water, along the way. Water is life giving and a very prominent symbol in Christianity. There is also a myth that says that after St James was martyred, a ship containing his body was lost and destroyed in a severe storm. After a long period of time, his body was washed ashore covered in scallop shells.
Camino is Spanish for ‘The Way’. Tie this together with our school motto, “Come Follow Me”, and you can see the link between Jesus’ invitation and the direction we are encouraged to head.
Along with the shell in the Camino Garden, you will see twelve old railway stumps (that are actually old Nar Nar Goon railway timbers). These represent the twelve apostles, of which St James was one! To further highlight the link with the Camino, you’ll see a swale, a dry river bed, meandering from left to right. This represents the pilgrimage aspect; a sense of movement, change and journey. 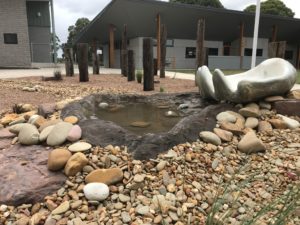