They wanted to learn a lot more about what that meant to Australia, to Nar Nar Goon and more importantly, to St James School.

In Year 1, the teacher there decided to teach her students about how Sydney was settled when Tall ships and lots of people arrived who did not understand about the local Aboriginals that lived there before them. It was a difficult time for the local people and many people died because of misunderstandings. The students learned also about The Dreaming and how our Creation story and The Rainbow Serpent have many similarities.

Aboriginal people cared for their land like a person. They used the land to find food and water, however they didn’t take too much because if they did, they would not have enough left when they needed it. They believed the spirits of their ancestors remained on the land and this was told in Dreamings, which were for their country only. Around Australia there are hundreds of different Aboriginal communities that have their own country.

The Foundation students have learnt that the word 'Reconciliation' means to say sorry for something we have done, to be forgiven and to fix the friendship with that person. They have made links to the parables Jesus told such as in The Prodigal Son as they understand that God will always forgive us if we forgive others and say sorry.

The community at St James in Nar Nar Goon are celebrating Reconciliation week with a Mass and acknowledgment of the history of their country. They know that the world is a better place when Reconciliation within their own country begins in their own back yard. In this way they can reach out in confidence to the rest of the world with peace in their hearts. ‘Come Follow Me.” 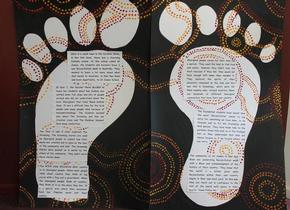