Last week, the students of St James were able to play on their new sports surface on the ‘big side’. It took a mere 3 ½ days to complete the project which gave the school fresh new netball court.

The new surface is an artificial turf, with a sand fill in the ‘pile’ of the grass which enables a good bounce when playing ball games. With its bright blue colour and easy to see lines, it really has improved the look of the area as well as the playability. 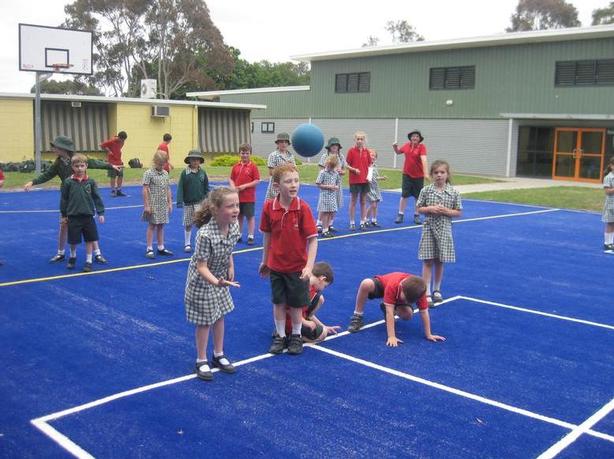 The prompt for the project was the ever increasing root damage that was evident in the raised asphalt. With so many bumps and cracks in both courts, the lower and upper, it was a concern for safety. Now that the upper court is complete, we just wait for the lower court project to finish, which should take a few more weeks.

The lower basketball court will be a different surface, being used for tennis also. The root damage (and offending tree) has been addressed and all the cracks and bumped have been smoothed over with concrete and asphalt. The asphalt will need a couple of weeks to ‘cure’ and then the final acrylic layer will be laid, complete with new lines to facilitate basketball, netball and tennis.

Both projects have been made possible with 100% of the money coming from Parents and Friends fund raising. This highlights the importance of the P&F and their role to play in the life of St James Primary School.