On Thursday, October 12, the Year 3/4 class went to visit the Mount Burnett Observatory. It wasn't an ordinary excursion though, because it was after school. We started by being taught about the history of the observatory and how people from Monash University were the ones who first built it. After talking about the history of the Mount Burnett Observatory we split into two groups of 20. 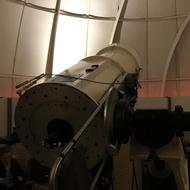 The first group went to the dome. You started at the bottom of the dome and we learnt all about the Milky Way and how there are many galaxies. We also talked about the size of things in our universe. We learnt that one little part of space have so many things in it and we haven't even found everything yet. You might think Earth is big but you should see the biggest Sun we have found. It is so big it makes our sun look tiny!

Then we headed up the ladder to the top of the dome. We looked at the big telescope but it's not the biggest one there is. Unfortunately, it was too cloudy outside so we didn't get to look through it. It had a massive mirror in it to help you see. Some of us, got to turn the handle which moved the roof of the dome. I thought the whole room was moving!

The second group got to learn about dwarf planets, supernovas, eclipses and anything else we asked questions about. They showed us a computer program called Stellarium which let's you look at the night sky on your computer screen just like you can if there was no cloud outside.

We enjoyed it a lot, it was just a shame the weather wasn't very good. We'd like to go back and look through the telescope when there was no cloud.

By Georgia S and Tarrant M