Our Farewell from St James

On Wednesday the 4th of December the grade six class of 2013 graduated. It was a very memorable night and made a few of us cry. It started with the candle ceremony of our years at St James.

Next we had the gospel, the feeding of the five thousand. We acted it out. Amber was Jesus; the disciples were Trent, Isaac and Aaron. The rest were the crippled, blind, dumb and the lame. When we finished the act we all got in line and sang.

Before Deacon Tony finished the liturgy we had a slide show showing pictures of us before and now. It was very funny.

After that there were awards handed out. There was a Christmas card competition award which was won by Imogen Atkins. There was also an award from the Pakenham Rotary. It was awarded for academic excellence, which was given to Heidi Deane.

There were also awards from the Bunyip Rotary which were for citizenship. Those awards were given to Harry Tweedale and Amber Dortmans. 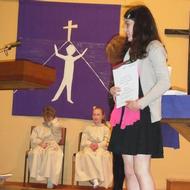 Last of all there was an award given from St. James for who demonstrated the motto “Whatsoever you do to the least of my people that you do unto me.” That award was given to Grace Thornton.

Aaron Chalker won the scholarship given out for Saint Francis Xavier College. This award covers the first term fees of the college, so well done Aaron. 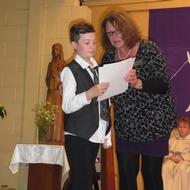 Overall the night was fantastic and we all had a great time. We are very appreciative of all the people who came to support us and for the Grade Fives for catering. The night was amazing and we could not have done it without all the support.

By Grace and Heidi